I think you guys are familiar with Starbucks and I am sure you can figure it out with its logo. As Starbucks become more and more popular, its Siren logo is remembered by many people. However, have you noticed that this logo has undergone several changes? 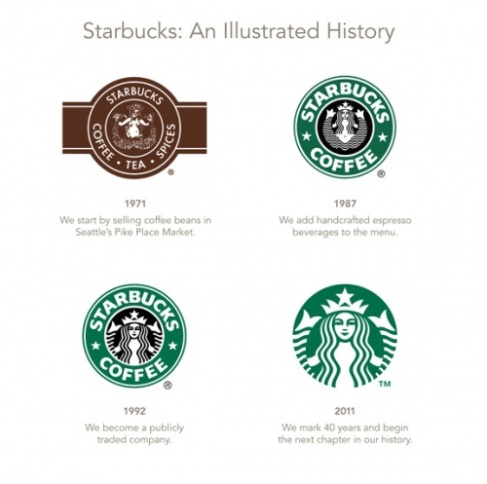 Why does Starbucks decide to change its logo? How does it influence its customers?

As for the first logo, it is established when Starbucks first came into the market. It is proved that when facing with new brands, people tend to choose the one they are familiar to (Reutskaja el al 2011). Since the myth of siren is well known to consumers, the picture of siren is chosen. Moreover, siren is part of culture which indicates that Starbucks is a brand with deep meaning. So customers will define the brand as of high quality and classy. Most people think the stuff they use shows their taste; just like that you may think women with Dior have good tastes (Paul Cézanne). Starbucks wanted the similar effect. Then, the color brown is easy to understand, consumers can easily relate it with coffee. The first logo was a little bit complex but could give entire information to customers that it is cultured and fabulous so it successfully attracted many customers and help Starbucks to survive in the markets.

Starbucks didn’t stop its pace. “How to make it better and how to build its own brand style? “ is what Starbucks kept seeking for. Salen Abdulaziz (2007) indicated that the change of logos do not merely show the company’s tendency to change its appearance but also underlies some other changes are taken or will be taken by the company. Starbucks also used the logo change to tell the world that it was changing. Hence, when Starbucks changed its color from brown to green it wanted its customers to recognize that it had expanded its products to more types of food. Due to the theories of colors, Brown may not be an appropriate color for food since consumer may think brown is dirty and lousy while green can make customers feel clean and fresh.

Then, Starbucks chose to simplify its logo which made siren a nearly bare woman. Even though this logo resulted in many complains, Starbucks’ spokesman said that “it is just a temporary method to stop the deduction of its stock price.”  This revealed that Starbucks just wanted to use the change of its logo to draw customers’ attention back so as to stimulate customers’ willingness to go into  Starbucks to find out what’s going on. Similarly, in 2006, Starbucks also took the advantage of “nistogal effort”. They used the original siren logo on the Pike coffee. This special offer effectively caught customers’ nostalgic mentality so as to increase sales and beat the criticisms of Starbucks. (David 2008)

In 2011, Starbucks abandoned the external ring of it brand name, which turned out to be simpler. This action implied that Starbucks would extend to more other fields.  The high recognition degree of its logo will unconscientiously impose Starbucks’ brand image to its new products. Due to consumers’ trust and loyalty, it will lead to success in popularize its new products.

16 thoughts on “Why changing logo? — Starbucks”